At the beginning of the summer, we had a brief concern that The Engineer wasn’t getting enough iron in her diet. She doesn’t eat a lot of red meat in general – in fact, she prefers that her diet consist of dairy, bread, and fruit. Her pediatrician asked me what kind of veggies she ate…and I hated to say it, but the truth was:

None. Zero. While I serve veggies with most of her meals, she regularly does not touch them. This doesn’t really bother me. I know it takes a billion times for a kid to be introduced to a new food before she likes it and it takes a billion times of trying that food before a kid actually likes it. So I never worried too much about what she left on her plate until we thought that she might have an iron deficiency.

Her wise pediatrician suggested sneaking spinach into her popsicles. That, my friends, is how we discovered how to get The Engineer – and The Artist – to eat their veggies on a daily basis. 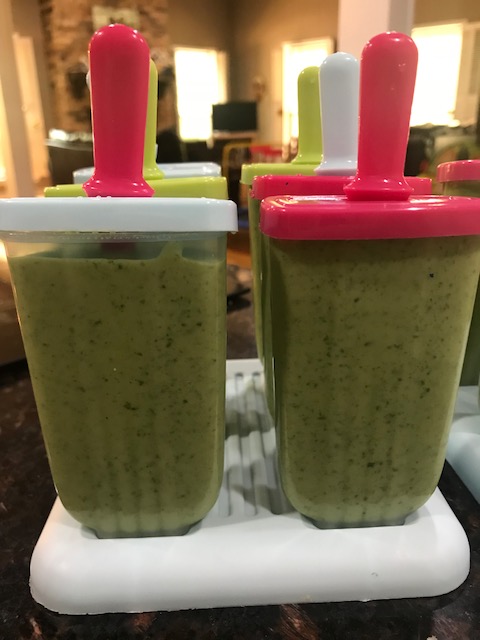 Every other day – but seriously – I spend about ten minutes at the blender making 10 green popsicles. I don’t have “add one cup of spinach” or “add two cups of yogurt” or anything like that. It’s not a real recipe in the sense of adding specific measurements. It’s a “mama-needs-her-kids-to-eat-their-veggies-throw-it-together” recipe. It’s literally spinach and yogurt. Maybe a banana if we have one available and I’m feeling froggy. And that. Is. It.

Spinach and yogurt. Yep. Freeze into molds and serve on demand. During the summer, The Engineer could down three of these during one episode of “Puppy Dog Pals.” And because her sister was eating it, The Artist wanted one, too.

I varied it up a little one time by putting a bag (no, seriously, a full bag) of chopped spinach in a thing of boxed brownies because I’m assuming these kids aren’t going to eat popsicles daily throughout the winter (though I could be wrong…). They LOVED them. And they couldn’t believe that they could have TWO at a time. It was basically the best week ever.

And, yes, because they eat them every day – and often more than one at a time – I do have to make these almost on a daily basis, but that’s okay! And, what’s even better is that if they want to eat three of these for a snack and then don’t eat a lot at dinner – that’s okay too! Because they’re healthy.

Even better – I learned that there is dairy free yogurt (I’m sure I’m the only one on the planet who didn’t know this, but maybe there’s one more person out there who didn’t know), so if you’re pregnant or nursing or someone in your family has a dairy allergy, they can easily be modified! And still be healthy for kids – and adults!

So eat your veggies, sweet blogger friends. And get your kids to eat them, too. Even if you have to sneak them into your brownies.

View all posts by judithproberts

3 thoughts on “Eat your veggies”

What I write about